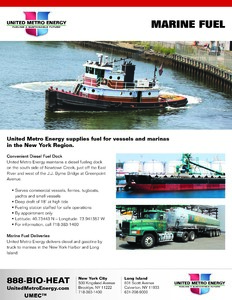 United Metro Energy has multiple strategically placed locations in the New York Metropolitan Area and Long Island to effectively store and deliver our fuel to best meet our customers' needs.

United Riverhead Terminal, Inc., an affiliate of United Metro Energy, owns one of the largest petroleum terminals in the Mid-Atlantic and New England regions. Located 80 miles east of New York Harbor on a 286 acre site in Suffolk County, New York, the Riverhead terminal features 20 storage tanks totaling five million barrels of capacity, a truck transfer rack, and an off-shore barge/ship platform. The offshore platform is located in the deepest channel on the East Coast and is the only deepwater loading/unloading platform on the U.S. Eastern Seaboard. With an operating draft of 64 feet, the terminal's offshore platform routinely receives Suezmax vessels and is capable of handling tankers carrying over one million barrels of crude, gasoline, diesel, or heavy fuel, giving United Metro access to vast supply and storage resources.

United Metro Energy’s affiliate, United Biofuels, Inc., is building one of the largest state-of-the-art advanced biodiesel production and blending facilities in the New York Metropolitan Area, with a capacity up to 50 million gallons per year, in Brooklyn. This will ensure a steady in-state supply of biodiesel for buildings and truck fleets for the New York Metropolitan Area and Long Island for years to come. When the plant is complete, United Biofuels, Inc. will be capable of producing biodiesel from the widest range of sustainable, high-energy-balance feedstocks that include domestically grown soy, canola, recycled restaurant grease, used vegetable oil and algae. Much of this feedstock will be barged into the United Biofuels, Inc. facility. We look forward to being able to offer clean, renewable, “Made in New York” fuels and blends for both heating and transportation.